SuperScript is a quarterly newsletter from SUPERSTRUCTURES. Founded in 1981, we are a firm of architects, structural engineers, and conservators dedicated to the art and science of exterior restoration.

The Facade Inspection & Safety Program (FISP, also known as Local Law 11) is a set of regulations addressing the conditions of NYC’s buildings’ exterior walls and their appurtenances.

Every five years, facades of all NYC buildings over six stories must be examined by a DOB-qualified professional (a QEWI), and a report filed with the DOB.

Local Law 11 comprises a section of the NYC Administrative Code (1 RCNY 103-04) fleshed out in a rule promulgated by the DOB.

SUPERSTRUCTURES has been performing mandated exterior wall inspections for many of NYC’s most prominent buildings since the inception of the City’s first facade inspection ordinance in 1980. Our experienced architects and engineers can help you navigate and comply with FISP.

This table shows the three phased sub-cycles within Cycle 9:

The content in the tabs below will help you understand FISP, what it means for your building(s), and how we can help you stay in compliance with confidence. 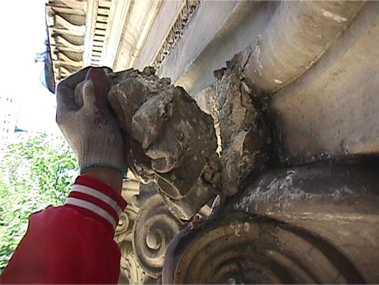 The general requirements governing facade inspections in NYC are contained in Article 302 of Title 28 of the NYC Administrative Code, entitled Maintenance of Exterior Walls. Detailed inspection and reporting requirements, as well as penalties, are delineated in 1 RCNY §103-04 Periodic Inspection of Exterior Walls and Appurtenances (DOB Rule 103-04).

The DOB adopted an amendment to DOB Rule 103-04 which became effective at the commencement of Cycle 9A on February 21, 2020. 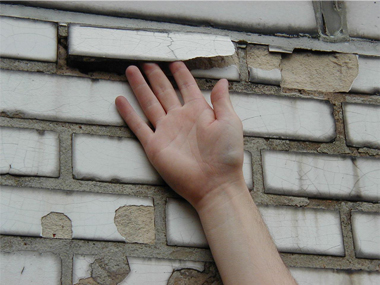 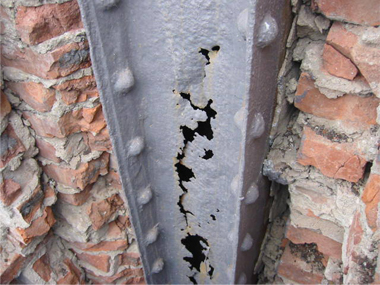 This section offers information on the following topics: 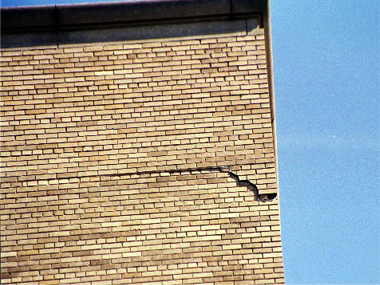 A Qualified Exterior Wall Inspector (QEWI) must be a licensed architect or professional engineer with at least seven (7) years of relevant experience per 1 RCNY §101-07 Approved Agencies. QEWIs must also provide detailed resumes and prove to the DOB that they have relevant experience and knowledge of NYC building codes and facade rules.

Classification of Buildings and Observed Conditions

Buildings and conditions are classified as SAFE, UNSAFE, or SAFE with a Repair and Maintenance Program (aka SWARMP). Conditions identified as UNSAFE must be corrected on an expedited basis. Conditions identified as Safe with a Repair and Maintenance Program (SWARMP) in one inspection cycle must be corrected prior to the Recommended Repair Date in the FISP report, but not later than the filing deadline of the following inspection cycle.

When the DOB has been notified of an UNSAFE condition (regardless of whether the UNSAFE report is based on a physically hazardous condition observed in the field or an unrepaired prior-cycle SWARMP condition described in a Critical Examination Report), compliance with 1 RCNY §103-04 requires the building owner do the following:

The following filing fees are associated with FISP reports and applications:

*extension may be less under certain circumstances

Note: The Department of Finance adds a 2% fee on filing fees paid by credit card.

In Cycle 9, the DOB has increased financial penalties to encourage timely filing of reports and expedited repair of UNSAFE conditions for which extensions have not been granted. 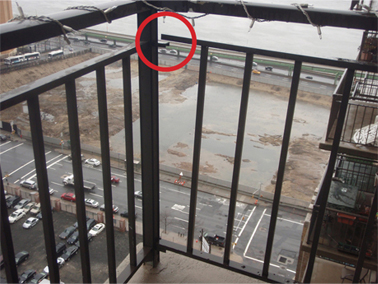 An April 2013 DOB amendment to Rule 103-04 imposed a new “fall protection” requirement that balcony railings and guards be inspected “to ensure that their components (balusters, intermediate railings and panel fillers) are positively secured against upward movement (e.g., by welds, bolts, or screws).”

In the context of FISP, “balcony” is used as a general term encompassing the entire balcony structure, including handrails, guards, railings, and connections.

The details of this inspection are outlined in the DOB Memo issued on May 5, 2014, which stipulates: 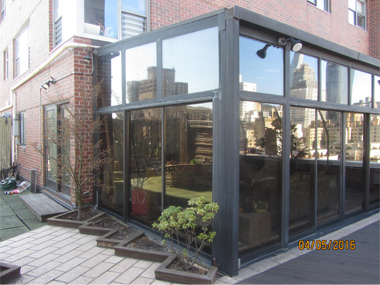 All guards, railings, balcony enclosures, and greenhouses must be inspected to ensure that their components (balusters, intermediate railings, and panel fillers) are positively secured against movement (e.g., by welds, bolts, or screws).

Any guard, railing, balcony enclosure, or greenhouse found to NOT be positively secured must be classified as UNSAFE and be made SAFE in accordance with the procedural requirements of the Rule.

In 2016, the DOB launched its DOB NOW: Safety web portal where all FISP actions occur online. Building owners, their representatives, and their QEWI’s conduct all facade-related interactions with each other, and with the DOB, through DOB NOW.

*To simplify the owner’s review of the report, SUPERSTRUCTURES provides a PDF version of the FISP Report to our clients for review and comment.

Owners and owners’ representatives who currently have an active “eFiling” account with NYC Development Hub do not need to create a separate DOB NOW account.

If you do not already have an active “eFiling” account with NYC Development Hub, create one by:

The filing requirements for recently constructed or vertically enlarged buildings are summarized in the table below.

The Date of the First Temporary Certificate of Occupancy (TCO #1) for a recently constructed new building can be obtained from the DOB Buildings Information System (BIS) website. For assistance in identifying the date of TCO #1, please contact us. 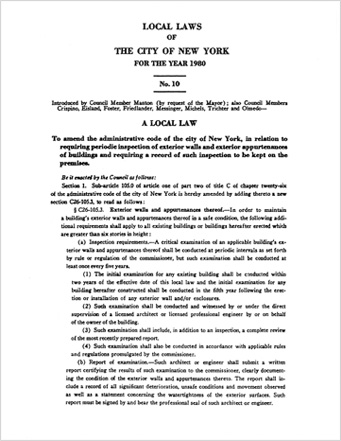 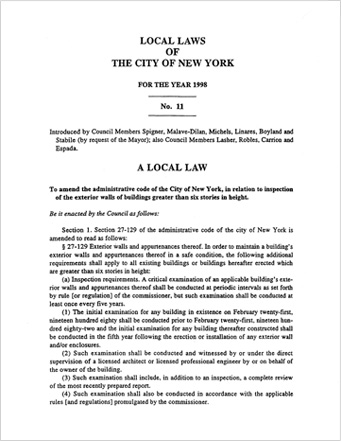 Local Law 10 of 1980, as amended and amplified by Local Law 11 of 1998, is the oldest continually enforced facade inspection law in the nation. The program governed by these laws is now referred to as “FISP” signifying the NYC Department of Building’s Facade Inspection Safety Program. There are upwards of 12,500 buildings subject to the inspection requirements of FISP.

New York City’s initial facade inspection law, Local Law 10, was enacted in February 1980, shortly after a piece of masonry fell from the facade of a building on Manhattan’s Upper West Side, killing a pedestrian. The New York City Council, in an effort to minimize the chances of such accidents ever occurring again, amended the NYC Building Code, mandating that owners of applicable buildings have their exterior walls and appurtenances periodically inspected by a licensed professional engineer or registered architect. The first facade inspection cycle ran from February 21, 1980, to February 21, 1982.

In July 1980, the DOB promulgated DOB Rule 1 RCNY 32-03 governing Periodic Inspection of Exterior Walls and their Appurtenances. The new rule expanded the general requirements of the law and provided more specific requirements for compliance. (The DOB Rule had been revised on several occasions and was re-numbered 1 RCNY 103-04 in 2011.)

In December 1997 a large section of a side wall of 540 Madison Avenue rained down on the street from above the 33rd floor. Tons of debris were left hanging in a safety net that had been installed as a precautionary measure after the bulge in the wall was observed. Remarkably, injuries were relatively minor.

FISP inspections now occur in three “staggered” two-year “sub-cycles,” commencing one year apart. Buildings are divided into three groups, (Sub-cycles A, B and C), based on the last digit of their respective “Block” number (as in “Block and Lot”). See Cycle 9 Information tab for details.

In April 2013, in response to a tragic balcony accident, DOB Rule 103-04 was again amended to include inspection of balcony railings to “insure their adequacy and structural integrity.” The rule was further revised by a departmental memo in May 2015 expanding the interpretation of “balcony” railings to include handrails and guards on all terraces, walkways, corridors, fire escapes, roofs, and setbacks, as well as “any other related handrails and guards.” Balcony enclosures as well as rooftop greenhouses and solariums were incorporated by a departmental summary issued in July 2015. 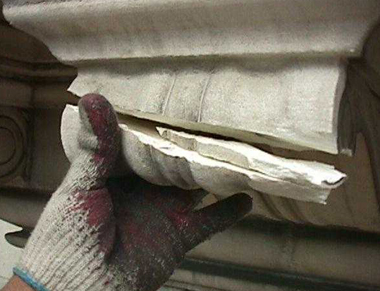 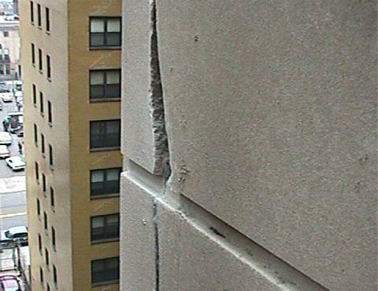 Every facade type (old and new) exhibits characteristic forms of deterioration. Water is the enemy of building facades, particularly in our NYC climate with its winter freeze/thaw cycles, salt air from the marine environment, and air polluted with chemical salts. Water infiltrates facades through small cracks in masonry and through deteriorated sealant via capillary action.

In winter, the water freezes, expands, and causes the tiny cracks to enlarge. In a vicious cycle, water continues to infiltrate the facade wall through the larger cracks. The water within the wall, in turn, causes unprotected steel beams and columns to rust. The rusting steel expands, and eventually will cause a parapet to shift, or a spandrel wall to bulge. The process is termed “ice-jacking.”

Pre-World War 2 buildings, many approaching 100 years or more in age, have an intrinsic advantage over more modern structures. They were built with a fortress mentality. Solid masonry walls 24 inches thick were not uncommon. The masonry mass of the wall was used to resist water penetration. Architectural details such as cornices and belt courses were not only ornamental; they served the functional purpose of helping the facade shed water. However, advanced age, and lack of proper and systematic maintenance of many older buildings have exploited the inherent weaknesses in the systems.

The life expectancy of many lighter gauge Post-World War 2 “cavity wall” brick-faced facades, now approaching 70 years in age, will not equal that of their more massive predecessors. Small galvanized metal ties and anchors bonding the exterior brick course to back-up block were either not originally installed in adequate numbers, or have deteriorated.

In the current speculative building boom, facades often comprise a mosaic of varied materials: expansive glass curtain walls, precast brick and metal panels, and stucco. Assembly of these facades requires rigid construction tolerances in both materials and workmanship, which sadly are not being met. Many of these buildings are already displaying symptoms of facade failures such as water and air penetration – shortly after they are completed.

The requirements of the facade NYC’s inspection laws, when followed, serve to provide a reasonable degree of protection of pedestrians from catastrophic facade failures.

Furthermore, while Local Law 11 / FISP is sometimes perceived as a “nuisance” for building owners, it presents an opportunity for knowledgeable owners to take a longer view, exploiting an opportunity for preventive maintenance, thereby reducing future deterioration, and the higher cost of deferred maintenance.

This document includes further interpretations related to compliance with requirements of the May 5, 2014 Balcony Memo, as well as building code citations.
DOB Summary compilation of industry discussions regarding code sections pertaining to balconies, enclosures, handrails and guards; July 31, 2014